Brookelynn Entz is a Trailblazer

In all aspects of life and humanity, there are trailblazers. A group of people or an individual that paves the way and sets new standards in a particular field. Trailblazers aren't always leaders, but when they are also leaders, something special happens.

That something special is Brookelynn Entz, and long before she set new standards for a Division 1 program in one of the toughest conferences in the country, she was already a career trailblazer.

The unspoken but known secret in American sports is that players from small towns and cities are often overlooked before they've even had a chance to prove themselves. It is a misconception based on the idea that small towns do now match the competition level and depth of a bigger city; therefore, any accomplishment, no matter how incredible, is overrated.

It was this type of perception Brookelynn Entz faced her whole life, ailing from Newton, KS, a small town in southeastern Kansas with a population of just under 20 thousand. Newton high school isn't known much around Kansas, and that dictated how many viewed her accomplishments.

Even after she scored goal after goal in a storied high school career, totaling 123 career goals, 41 goals her senior year, and back to back regional titles against some of the best schools in the state and region, she faced skepticism.

It was an experience that was vital in developing her unique ability as a game-changer, capable of taking over a game at a moment's notice with her skill on the ball. Entz would face the best every opponent had to offer each night with entire schemes based on minimizing her talents, yet she still excelled, scoring goal after goal and assist after assist.

What was unquestionable was that the incredible talent was there, even as coaches passed off her highschool and club accomplishments as a result of inadequate competition.

She got little collegiate notice even as she excelled at College ID Camps. Coaches would tell her they were surprised by how talented she was, considering she did not come from a city or a club that was traditionally on their radar. But it was more of a backhanded compliment.

One example was at a soccer camp where a coach from the KU Soccer program told her she wasn't quite good enough for their program because she did not play for the teams that they traditionally looked to for recruits.

But not playing for a traditional powerhouse doesn't mean the talent or the coaching isn't there. And for Brookelynn, she was fortunate to have a coach who could take her game from one level to the next.

She owned her talents with the Wichita Warriors, a team about 40 minutes from her home in Newton. The team was coached by Ernesto Alcantara, one of the premier youth soccer coaches in Wichita and the state of Kansas, and someone Brookelynn speaks of glowingly. "He trained me since I was in like third or fourth grade, and he taught me everything I know."

The admiration goes both ways, as Alcantara described Entz by saying: "Brookelynn possesses the 3 characteristics that Anson Dorrance points out to make you a top soccer player; Competitive Fire because she always played to win. Self-Discipline to work on her own to get better, and Self-Belief, she knew that she could be as good everyone else."

This belief and training base was vital to turning a girl that was a raw bundle of talent from day one into the high school, collegiate, and future professional player capable of taking over a game by herself.

Brookelynn Entz might best be described as a walking highlight reel, someone capable of pulling off the unexpected, someone who specializes in thinking outside the box and doing what others wouldn't even consider. But a lot goes into that behind the scenes.

Freshman Brookelynn Entz netted this game winner in the 95th minute for the K-State OT victory! (via @KStateSOC) pic.twitter.com/AiDYLOzamE

She is someone who has sacrificed countless hours and days with family and friends to work on her craft. It's why she's succeeded at all levels. It's what made her stand out and helped put her town of 20,000 on the map.

By the time it was time to commit to a college program, Brookelynn wanted a team that matched her path.

The match with K-State was a perfect storm. A new program, led by a new coach looking to make a difference. That coach was Mike Dibbini, someone that was known by Brookelynn and the Entz family dating back to elementary school days where she would attend his camps as then head coach of the Kansas Wesleyan program.

Entz had aspirations of Division 1 college soccer, so once Mike Dibbini was named the head coach of the state's newest Division 1 soccer program, it felt like a match made in heaven.

Brookelynn was hooked by the idea of playing at the highest level of college soccer for a program whose story as an underdog paralleled hers.

At K-State, she found family and a coaching staff dedicated to setting new standards and the personal improvement of every player.

When a trailblazer gets an opportunity, the rest is history.

Her freshman year was the program's second-ever, and Brookelynn came in as trailblazers often do, setting new records and standards. 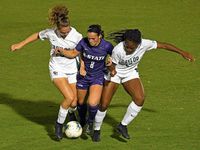 Her five goals as a freshman was amongst the best in the entire conference, a conference packed with US Youth National Team players. Those five goals were also a new single-season record for the program. The golden moment came when in her freshman season, Kansas State defeated Kansas University, beating their in-state rivals for the first time in program history. A monumental win against a program that had a two-decade head start. A victory over a coaching staff that told her she wasn't quite good enough years earlier.

The three years after that was a continuation of her role as a trailblazer.

This last season, her final for the program, Brookelynn reached new heights for herself and the program. In the Covid shortened season, the team scored ten goals in total Brookelynn had half of those goals, registering five goals in just eight games, tying her personal and school record for goals in less than half of the games in a regular season.

She rightfully ended the season with recognition on the Big-12 Conference First Team, the first player in K-State history to receive that recognition. There was only one another time a K-State player made the first or second team . . . that was also her in her junior season.

Brookelynn Entz leaves the K-State Soccer program in a better position than when she came in, and that is no coincidence.

She leaves as the record holder in 28 different statistical categories. That alone is an incredible feat that epitomizes her role as a trailblazer for the program. Not to mention helping the team set a new high for single season conference wins in her final season. Only five years old, the program is years ahead of where it should be and looks ready to take the next step towards contention in the BIG12. Those steps look much more possible thanks to Brookelynn Entz and the new standards she has set for the team.

While Brookelynn's strengths on the pitch are her unpredictability and the ability to do the unexpected, off the field, people describe her as an extremely trustworthy and reliable person. These endearing traits are the foundation that has allowed her to be a leader on every team she's played for and in every walk of life. A foundation deeply rooted in her family and her faith in God, which she describes as the most important thing in her life.

Brookelynn Entz is not done playing yet, whether it will be through the NWSL Draft or an opportunity overseas, she will have professional opportunities. Whatever team gets her next will be getting a game-changer and a trailblazer.

Far-Fetched Friday: The Charlotte Hornets Get to the Second Round of the Playoffs

Currently occupying the 7th seed in the Eastern Conference, the Charlotte Hornets won't have history on their side if they maintain their position. Since 2000, there has only been one 7 seed that has one their first round matchup in the playoffs (2010 Spurs.) That being said, the Hornets will buck tradition in the upcoming NBA playoffs and win...

Romelu Lukaku, just a little over four months into his massive transfer move back to Chelsea, has found himself involved in some serious drama. Lukaku sat down with Sky Italy and gave them an interview saying how much he feels disrespected at Chelsea and that Tuchel has picked a system that does not favor him, explaining why he has...