Maycee Bell Is Comfortable With the Uncomfortable

In the interview about what has shaped her athletic career, Maycee Bell references one mantra that sticks out: "To be comfortable being uncomfortable."

That was a quote she heard back in middle school and has stuck with her since. It was from Ernesto Alcantara, a youth soccer coach she considers the most influential she has had. And looking back on that mantra to be comfortable with the uncomfortable, it is certainly a fitting one for a person whose status as a youth soccer phenom has been so life-changing that freshman year of high school was the last time she lived in the same home as her parents

If you're not familiar with soccer, you may not have heard the name Maycee Bell, a junior star at the University of North Carolina. But, she may be the greatest soccer player to have ever come out of Wichita, KS.

It is a little ironic that Maycee Bell turned out to be a soccer star; she certainly didn't come from a soccer household. Both parents were high-level collegiate basketball players and put Maycee in youth basketball early on. But out of wanting to do something with her friends, and compete in a sport her parents would know nothing about, so they couldn't nag her, Bell ended up on a soccer field. First, at age four on a YMCA team, then on much more competitive teams.

And despite playing basketball up until middle school, Maycee's love was always soccer. She was good at it too. Eventually too good to play exclusively in Wichita. She played two years up for most of her early youth career, but that was still too easy, so she joined an all-boys team, but she was still an outstanding player. Then, 8th-grade year served as definitive signs of a need for a change in competition.

In a grade when most athletes are more concerned with post-game meals than the result of the match, Maycee became one of the most coveted recruits in the country practically overnight.

At tournaments in the Kansas City area, as a middle schooler playing against high school opponents, Maycee Bell stood out above the rest. Her dominant performances led to her first invitation to the U.S. Youth National Team Soccer Camps and had Division 1 programs showering her with attention. So much so that the University of Kansas' Women's Soccer Staff brought her in for a visit while she was still only an 8th grader.

And at her first Youth National Team camp, Maycee got one of her most defining tastes of being comfortable with the uncomfortable. The national team coaching staff told Maycee they thought she could become an elite center back. She was a forward before this point, and center back was as far a change as possible other than goalkeeper. But why not try the position if the people most knowledgeable on the game saw a brighter future for her there.

Maycee has not looked back since. She fell in love with the position, particularly in the challenge and responsibility of playing a perfect game in ensuring opposing forwards do not get a goal. Forwards enjoy the luxury of multiple opportunities to try and score a goal; defenders are perfectionists who know all it takes is one mistake to turn a great game sour.

Maycee was far from a regular high school student, as with many youth sports stars. She committed to the University of North Carolina as a freshman in high school. She attended four different high schools starting in Wichita, then in Kansas City, then North Carolina while doing online school. All to change her environment and introduce her to greater competition. It's something Maycee describes as being difficult at the time. Missing out on homecoming, prom, and all the other traditional high school experiences was tough, but looking back, it's something she would absolutely not change. Partly because Maycee got to enjoy one season of high school soccer and normalcy as a freshman at Wichita Trinity High School. 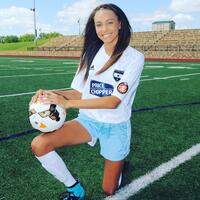 Despite missing multiple games traveling to fulfill her Youth National Team duties, Bell still won the Kansas Gatorade Girls Soccer player of the Year award, scoring 19 goals and six assists in merely 14 games. It was the last time Maycee Bell got to play as a forward and is an experience she cherishes as it meant playing one final season with her childhood friends.

That year was also the last time she would live with her parents.

Through freshman year, every day, Bell's parents were driving 6 hours round trip after school to ensure she would get to practice in Kansas City, then back home for high school in Wichita the following morning. It was a heavy burden for a family with multiple children. An option was to allow Maycee to move to Kansas City full-time to live with a host family and pursue her dreams. It was tough to let their child move to a new city by herself at just 14, but her parents had faith in the person they had raised. After all, this was someone who maintained a 4.0 GPA despite the constant trips around the world and daily drives to Kansas City and back. As the oldest of 6 children, they trusted Maycee to have the character to navigate and grow by herself at such a young age.

That character to not only be comfortable in an uncomfortable situation but to thrive. And thrive; she did.

By the time she stepped foot on the UNC campus as one of the most prestigious freshmen the program has ever had, she had already represented the United States at the U16, U17, U18, U19, and U20 level, serving as captain for several of those teams.

By the way, this is a program whose 21 NCAA Division 1 National Championships are 18 more than the schools in second place and two more than every other team combined. Of 40 total championships, UNC has won more than half. And all under a coach in Anson Dorrance, who many consider the greatest coach in NCAA sports history.

That same coach has coached 74 first-team All Americans, dozens of Olympic and World Cup-winning players, and some of the most famous names in American Soccer history like Tobin Heath, Kristine Lilly, Heather O'Reilly, Jessica McDonald, Crystal Dunn, and Mia Hamm.

Of all those players, for a historically dominant program and a coach who has shaped American and college soccer culture, Maycee Bell is the first freshman to have started from the very first scrimmage.

And right away, Bell showed why. In her first week as a college freshman, Bell was named the ACC defensive player of the week. The ACC is the premier conference in College Soccer, boasting an additional 6 National Championships between Notre Dame and Florida State and 12 more Final Four trips between Duke, Virginia, NC State, Virginia Tech, and Boston College.

That freshman season included recognition as the ACC freshman of the year, and a clutch game-winning header in the Elite Eight, a goal Maycee calls one her favorite moments in soccer. She also led the team in minutes despite missing two full games because of a minor injury. It cumulated to a trip to the National Championship game that ended in a heartbreaking loss in PKs to Stanford after finishing regulation 0-0.

It feels like it's only a matter of time before Bell gets a call-up to the Full National Team. It could have come after her freshman season as she was invited to a camp with the senior team but could not play because of a quad injury she suffered in the National Championship Game. Still, Maycee attended and got to experience some of what it looks like when the opportunity comes again.

This last season, Maycee served as captain of the North Carolina team as a junior, was named an All-American, and was nominated for the MAC Hermann Trophy, which is college soccer's equivalent of the Heisman. But Maycee feels as if there is more to do. She's won multiple ACC Championships but wants one more shot at a National Championship. She lost in the National Championship game as a freshman, lost in the Semi-Final as a sophomore, and this last year saw a disappointing loss in the first round.

Even at UNC, where Maycee describes an experience that has lived up to and surpassed her dreams, Maycee still practices the mantra of staying comfortable with the uncomfortable.

In early 2021, during the Covid altered season, Maycee suffered an ankle injury in the spring that looked like it would rule her out for the rest of the season, with an estimated recovery time of 4 months after ligament surgery. An unfortunate circumstance that would have been too uncomfortable for most, but not Maycee. She focused on keeping a positive mindset and rehabbing to the best of her ability, the only two things she could control. It led to a miraculous recovery in just two months, just in time to play in the Elite Eight and then start in the Final Four, days later.

Professional soccer is calling and practically begging for Maycee Bell, with mock drafts suggesting she could have gone as early as first in the draft after her freshman season. But Maycee will be returning to UNC for one more season.

Bell feels like she still has more to improve on before taking that next step.

And for someone who missed out on everything Highschool had to offer because of her status, she is not eager to miss out on her college experience, especially at a prestigious program like UNC, and under a legendary coach like Anson Dorrance further developing her talents. Like he has in improving her 1v1 defending, heading, and on-field communication, something Maycee, an admittedly shy person off the field, said she struggled with early on.

Bell also cherishes her status as a black woman in soccer and the opportunity to set a positive example and give a voice to the voiceless. She knows that when she does take that next step, she'll be a cumulation of all of the experiences that have shaped her into the person she is today.

Professional Soccer will be there when she feels most ready to make herself comfortable with the uncomfortable yet again.

Be the first to read what's new!