Last year we dropped an initial ranking right after Damian Lillard hit that shot against the Thunder, and we promised to do another one after excluding that shot from the list due to recency bias. That time is now. Kawhi and Dame's additions last season had a monumental impact on the list. But so do LeBron's 5 Playoff buzzer beating game winners while no other player in the last 2 decades has more than two (Damian Lillard/Paul Pierce). With that said, here is the criteria we used to rank our Top 15.

The Criteria used will be six-fold:

1. Only shots after the NBA-ABA merger of 1976 will be considered

2. Context matters, the more significant a game winner the better (Playoff round, Game number, and success in rest of playoffs)

5. Stakes matter, whether the game was tied or a team was behind

Coming in at number 15 is the one and only Kobe Bryant. In this first round matchup from 2006, the Lakers were the underdogs to this Phoenix team. Down one in Game 4 with 6 seconds to go, Kobe helped force a turnover before rising up for a mid-range jumper with no time left on the clock. This took Kobe's total to an iconic 24 and more importantly gave the Lakers a 3-1 lead. However what would follow was a collapse, cumulating with 3 straight losses and a 31 point loss in Game 7. Had the Lakers won this series, this shot would be higher in the list. 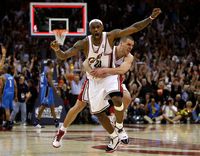 The first of many LeBron features on this list. His most famous playoff game winner is also arguably his most irrelevant. This 3 pointer with no time left on the clock evened the Conference Finals Matchup against the Orlando Magic at 1-1. It took LeBron to a staggering 35 points in what was essentially a must win for a Cavs team that dropped the first game at home. The Cavs would go on to lose this series which means this shot can go no higher than 14th. 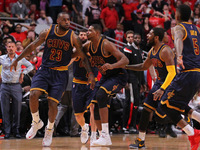 The game before this, Derrick Rose had hit a game winner to give the Bulls a shocking 2-1 lead. Needing a win to even up the series, LeBron's catch and shoot game winner from the left corner broke Chicago's heart and gave him 25 points for the night. This shot ranked higher because, not only did it help the Cavs eventually win the series, it also served as a vital moment in their trip to the NBA Finals.

Ron Artest only had 4 points in this game, yet his game winner comes in at 12th. That's because of the long term significance of this shot. This was a vital Game 5, series tied at 2-2, Conference Finals. This fluky put back from a missed Kobe shot gave the Lakers a vital 3-2 lead on route to a second straight Championship. Without this shot, the Lakers may have never had the opportunity to even play in the Finals.

Here comes LeBron again. This arguably had the lowest difficulty of any playoff game winner due to a Pacers defensive lapse, but the significance of the shot cannot be argued. Just like Artest's shot, this was in the Conference Finals and it helped in the Miami Heat's eventual championship. Add that it gave LeBron his 30th point of the game, and that's how you get to this spot.

Something about the Lakers and the Spurs. While LeBron's shot was in a game 1, this was in a game 5 and it helped the Lakers on route to a 4th straight finals series. This shot also had incredible difficulty with just 0.4 seconds left on the clock. Would have been higher if not for the fact that it only gave Fisher 8 points for the game and the Lakers would go on to lose the finals to the underdog Detroit Pistons.

41 points, tied game, game 5, series tied 2-2. Who else but LeBron to deliver what was at the time his 4th career playoff buzzer beating game winner. A shot of high difficulty, this shot was vital in a series that would eventually go to 7 Games. Not to mention LeBron had blocked a game winning attempt by Oladipo seconds earlier to give himself this opportunity. It was also the beginning of one of the greatest playoff runs the NBA has ever seen.

Big Shot Bob. Robert Horry's improbable three pointer on the back of missed shots by Shaq and Kobe gave him 18 points on the night, and more importantly, it gave the Lakers a much needed victory in Game 4 of the 2002 Conference Finals. It's important to remember the Kings were the higher seed and this series went all the way to 7 games. Without this shot, the Lakers don't win the championship later than summer.

This shot may have been lower in the rankings if not for the fact that it was LeBron's second game winning buzzer beater of the 2018 playoffs alone, taking him to 5 for his career . . . This also had one of the highest degrees of difficulty and gave LeBron 38 points for the game. Tied game in Game 3 of the second round, anyone who watched LeBron against the Raptors in prior playoff series knew there was only one outcome. Fortunately for Toronto, LeBron would leave the East after this season, paving the way for their improbable Finals run.

With this shot, Damian Lillard announced himself to the basketball world. Portland was up 3-2 on the series but was down by 2 with .9 seconds left. A loss would mean Portland missed a golden opportunity to close out the series at home and would instead have to play a game 7 in Houston. Dame said cancel your flight plans and hit the first series clinching game winner the NBA had seen in 17 years to give himself 25 points on the night. Every shot from this point on was a Finals clincher.

This ranks slightly higher than Damian Lillard's because the Bulls were the 6 seed in the series going against the 3rd seeded Cavaliers. This series was only 5 games but down 1, Jordan needed to hit the shot or the Cavs would win the series. As they say, the rest is history. This shot also gave Jordan 44 points for the game. This would have ranked higher had it not been the first round of the playoffs and the Bulls would later lose in the Conference Finals.

The Rockets were up 3-1 against a Laker team with Kareem. This was a golden opportunity to seal the series and advance to the NBA Finals. Tied up, little time on the clock the ball went to Ralph Sampson and his quick turn around mid-air jumper sealed the series and a finals appearance for the Rockets. The Rockets would lose to the Celtics in those finals, but it would not have been possible without this shot and his 29 points on the night.

This goes down as one of the most important shots in NBA history. Paul George still insists it was a bad shot, but the degree of difficulty was incredible. Damian Lillard with one shot, sent the Thunder home, set the template for PG3 and Westbrook's exit, effectively put an end to an era for the Thunder that had players like Harden - Durant - Westbrook, and it marked the second time in his career that he ended a series with a buzzer beater. Oh, by the way, this shot gave Lillard 50 points for the game, the most of any game on this list. This would have been higher but objectively speaking, this was only the first round of the playoffs and the Blazers would later get swept in the conference finals.

Any time a game winner sends a team to the Finals, it deserves high consideration. This shot and Stockton's 25 points on the night sent the Utah Jazz to the 97 NBA Finals. Up 3-2 with a tied ballgame, the Jazz called John Stockton's number and he delivered. Damian Lillard's shot was more absurd, but this shot was far more important and relevant. Unfortunately, the Jazz would lose the finals which greatly decreases the significance of this shot. 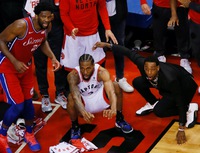 If you didn't know what shot would be first, then you must have missed the last year of basketball. This is without a doubt, the most important playoff buzzer beater in NBA history. This is the only shot that came in a Game 7, excluding Jordan's Game 5 shot in a 5 game series, and it helped the Raptors on their road to their first ever NBA Championship. It also gave Kawhi 41 total points for the game and it felt like the entire sports world stopped moving as the ball bounced on the rim. Add to the fact that it was over a 7-footer's outstretched arms in Joel Embiid, and you have arguably the most difficult shot on this list. For now, this is the most important playoff game winner of all time even though it came in the second round.

Far-Fetched Friday: The Charlotte Hornets Get to the Second Round of the Playoffs

Currently occupying the 7th seed in the Eastern Conference, the Charlotte Hornets won't have history on their side if they maintain their position. Since 2000, there has only been one 7 seed that has one their first round matchup in the playoffs (2010 Spurs.) That being said, the Hornets will buck tradition in the upcoming NBA playoffs and win...

Romelu Lukaku, just a little over four months into his massive transfer move back to Chelsea, has found himself involved in some serious drama. Lukaku sat down with Sky Italy and gave them an interview saying how much he feels disrespected at Chelsea and that Tuchel has picked a system that does not favor him, explaining why he has...