VAR Is Good For the Game

As recent as a few weeks ago, I was a member of the cult that contains an estimated 70 percent of the footballing world that believes VAR is not beneficial to the game. But something changed for me as I saw the light in a moment of truth.

I am here to speak up for the effectiveness of VAR, a concept that needs to be improved, not scrapped.

That moment came in the 89th minute of the FA Cup Final. Leicester City, a team I believe everyone should have a soft spot for, were minutes away from a historic win, a trophy that would be their first since their former owner tragically passed away in 2018.

As Chelsea bombarded the Leicester goal for a late equalizer, Ben Chilwell, a former Leicester City player, broke forward and scored an equalizer. It was a heartbreaking goal to give up for a team that had come so far.

But I sat there, along with the millions that watched, as Ben Chilwell's 89th-minute equalizer went to VAR review for offsides. The minutes it took to review the goal lasted a lifetime, and the suspense was near unbearable, and it made me think that, offsides or not, this type of suspense is what makes football great. Moments of uncertainty and anxiousness add to the dramatic flair of the game, and VAR had produced that here more than any other moment I could remember.

So it made me think that the argument that the review system somehow takes away from the suspense of the game was completely flawed. And if that was flawed, maybe we have all let our bias and aversion to change, as fans of the beautiful game, affect our ability to objectively look at Video Assistant Refereeing.

It is what led me to do some deep thinking and reach an eventual conclusion that VAR is absolutely a plus for the game, and here's why.

Every week it seems like there is some new controversial red card, penalty call, or offside call that fans and pundits moan and complain about as evidence that VAR has "ruined" the game as they like to hyperbolize. But my question is, concerning red cards and penalty calls, when has there ever been a uniform agreement on a call made? At the end of the day, just as with decisions before video review, with VAR, the referee making the final decision is still human and subject to having an opinion that may differ from you or another referee.

VAR never promised to get every red card or penalty call correctly. It just promised to give the referee a second look at it, something we all celebrate when it goes in your team's favor and complain about when it does not.

Or do you mean to tell me that you're okay with Thierry Henry's blatant handball goal in extra time of the 2009 World Cup Playoff that cost Ireland a spot in the World Cup? Because for me, my thought is if that happened today, I absolutely would be grateful for the existence of VAR and what it would do in ruling that goal out. It would make sure Thierry Henry did not get away with one of the worst moments of cheating in sports history.

And if you disagree with that conclusion, then simply ask yourself how it would feel if that was not Ireland, but that was your favorite team who missed out on qualification for a prestigious life-changing tournament because there was no video review to punish a blatant act of cheating. I suspect your opinion would change.

And that is precisely the luxury VAR gives us, the luxury of knowing that when it comes down to obvious moments of cheating, justice will be served.

And as far as the rest on red cards and penalties, that was already subjective and will remain so. Don't direct your anger at VAR. Not about the offsides call, the real meat of the issue people have with VAR.

It is absurd, to me, that some would prefer blatantly offside goals than have a system that gets the call correct even if it's by an inch.

After all, aren't these the same people that, in the days before VAR, would complain about assistant referees missing offsides calls that cost their team?

But now those same people are angry at a system that guarantees the correct call? It is a logical fallacy that can only exist in sports fandom, basically that the refereeing decision you like is whatever goes your favorite team's way, but when it works against you, there is no sense of objectivity. 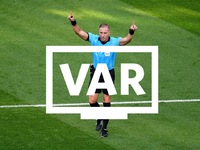 I vehemently refuse to believe that a change that means referees get offsides calls correct all the time, even if it is millimeters, is a negative for the game.

But in saying this would also require recognizing that the system could and should be improved.

For one, offside calls need some type of reasonable leeway and standard. Maybe a system that says any offside that comes down to a few inches of separation will be deemed onside. So, for example, Jordan Henderson's goal against Everton to start the season is not ruled offside because the bottom of Mane's elbow was off by an inch, which by the way, is a body part he could not legally score with. It leads to my next suggestion.

There also must be clarification on what body parts count as offsides. If a player can't punch the ball into the goal with their hand, why would a hand be used as part of the offsides verdict? I think the lines drawn for offsides should only be the body parts that can legally score a goal.

There should also be strict guidelines as to how far back an offside can affect a goal. Some refs go as far back as 30 seconds before the goal to say it affected the buildup play, while others have allowed the goal. So a specific count, maybe like 10 or 15 seconds before the goal, should be used so everyone is on the same page and enforcement is universal.

These aren't perfect solutions, or necessarily the best ones available, but it does shift the focus to improving the system by providing consistency.

The pushback VAR is receiving reminds me of the pushback FIFA and the FA received when they outlawed the back pass in 1992. Before 1992, teams could essentially get a one-goal lead and maintain that lead by passing the ball back to their goalkeeper for him to pick up, and over and over again like a terrible horror movie. The new law stated that a goalkeeper could no longer use his hands on a pass played to him by a teammate's feet.

People critiqued it, said it was changing the game for the worse, that the premier league would never be the same, that it was an unnecessary change to the game they loved, basically all the things people say now about VAR. There was chaos and a learning curve in the first two seasons of a no backpass law. But once those kinks were removed and the law was improved, the game grew for the better. Here we are 29 years later, and the idea that goalkeepers could ever pick up a backpass seems absurd, let alone the fact that people protested.

In my opinion, that is the trajectory we are heading for with VAR. The concept is in its early stages, and therefore there is a learning curve, but that learning curve should be viewed as an opportunity to improve upon the law, not as a reason to do away with it altogether.

I hope VAR is here to stay because it is undoubtedly good for the game.