Arsenal football club has been one of the biggest laughing stocks in European football for the last decade, which makes been a fan a tough task. But we still exist, and there will be a return to glory sooner rather than later. That return starts with an improvement in the transfer window, particularly in signing players, like Jack Grealish, who are proven premier league stars.

Welcome back to Far-Fetched Friday, where every Friday we give you a bold prediction that we believe will come to fruition. This Friday, we look at the man with the biggest calves in football.

I specify proven premier league stars because I believe that to be most important in returning to glory. Signing PL players means, in the time being, you can bring in players you know for sure will excel in England. Arsenal can no longer afford to experiment with expensive players who may ultimately fall below expectations. You sign a premier league star, and you know that at the very least, they'll do well for you in the league.

It's how Liverpool broke through their awful years to return to prominence. They signed Sadio Mane and Virgil Van Dijk from Southampton. Signed Jordan Henderson from Sunderland. Andy Robertson from Hull City, and James Milner from Manchester City.

What Liverpool recognized was that to quicken their return to prominence, they had to focus on players that represented the slightest risk. Arsenal must emulate this.

Arsenal is still a club capable of buying the best of the "rest" from the premier league.

Say what you want about Arsenal as a club; what you cannot decline is the size of their fanbase. Despite struggling for years, Arsenal still ranks top 10 of all European clubs, as far as total fan base across the world. It's why they received an invitation to the European Super League, and it's why stars like Odegaard, Nicholas Pepe, and Patrick Emerick Aubameyang have signed for the club despite declining results.

Arsenal can still utilize this reputation and draw to get the stars they quite frankly have no business getting.

So, bring in Jack Grealish.

Jack Grealish is a man linked with the likes of Manchester City, Manchester United, and Chelsea, all clubs who are performing much better than Arsenal. So, why would Grealish go to Arsenal?

Because Arsenal offers something those other clubs do not, and that thing is the chance to earn guaranteed playing time for one of the biggest teams in the world. With Arsenal, Jack Grealish can play a very similar free-roaming role to what he enjoyed at Aston Villa while spearheading a rebirth. He joins any other elite British club, and he becomes one of many.

Footballing fans laughed at Arsenal when Aston Villa beat them to the signing of Buendia. But that may have been a chess move that meant Arsenal could now go after Jack Grealish. 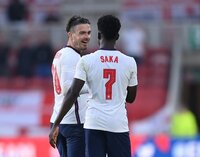 It is far-fetched, but Jack Grealish will sign for Arsenal this summer transfer window.