The Phoenix Suns will make the Western Conference Finals. Why? Because they have a complete team mixed with young talent and savvy veterans that plays unselfishly. Plus, they have the ability to match up against other contending teams in the west.

Welcome back to Far-Fetched Friday, where every Friday we give you a bold prediction that we believe will come to fruition. This Friday, we go down to Phoenix, Arizona.

In my opinion, the majority of championship-contending teams since 2007 have:

1.   A go-to star scorer -> They have that in Devin Armani Booker, whose skillset is sharp enough to negate any defensive scheme and is also building up a pretty good resume as a clutch shot-maker.

2.   A second star who can also get his own shot -> Chris Paul is perhaps the most overqualified second star you can have. His command of the game goes without saying. His midrange, however, might be the most dependable shot in the game.

3.   A third star who is willing to sacrifice and do the dirty things to help the team win -> Ayton is committed to it and is slowly getting better. He's 4th in rebounds averaging 12.2 per game. An area he needs to improve is his number of free throw attempts per game because he definitely has the talent to put the other team in foul trouble.

4.   A glue guy who can show up as an x-factor every other game -> Mikel Bridges is the ideal player any team would want in a 3nD wing. Also, don't sleep his off-ball skills and off the dribble game. I highly recommend the Ringer's Kevin O'Conner's breakdown of Mikel's game.

5.   A bench full of role players who can hit open shots and buy into their role -> The Suns have perhaps one of the deeper benches in the league with a rotation of Cam Johnson (career 38% 3pt), Frank Kaminsky (34%), Dario Saric (35%), Jae Crowder (34%), E'twaun Moore (38%), and even Cameron Payne (35%). Everyone on this bench is a capable 3pt shooter and is at least an average defender with the ability to switch. 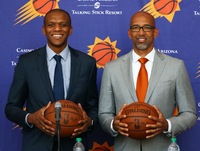 6.   A coach who everyone buys into and trusts ->Monty Williams has had a profound impact on the young guys:

After going 8-0 in the bubble and barely missing the playoffs, the league was put on notice of the rising suns in phoenix. For many of the young players, this was their first taste of competitive basketball with real stakes in the NBA. It helped the players realize what they were capable of and what they were missing out on. After the bubble in Orlando, it was clear that Devin Booker was ready to take the next step as the face of the franchise. The trade for Chris Paul, otherwise known as "Point god," and rightfully so, was followed by the signing key veterans in Jae Crowder and E'twaun Moore. After the offseason, it was clear what the goal of the 2020-2021 season was.

However, the Suns are still a work in progress. The fit between Ayton-Booker-Paul is still working itself out:

The line-up with Frank Kaminsky shows that the big 3 of Ayton-Booker-Paul can work out.

Booker got off to a slow start to the start of the season, which is to be expected. There was bound to be an adjustment period coming off a short, limited off-season and learning to play with one of the best pure point guards ever.

When you compare his first seven games to his last seven games where the Suns went 6-1, you can tell Booker is playing more like himself.

His assist-to-turnover ratio went up from .77 during the start of the season to 2.2 during the last seven games. He's also taking more shots while improving his efficiency. 53% on about 19.6 shots up from 50% on 15.9 shots. Just shows that he's getting more and more comfortable in the offense.

Despite most of his numbers being the same, Ayton has also improved when you compare the first 7 to the last 7. He has a plus 8.9 in +/- during the last seven compared to -1.3 to start the season. For Ayton, it's easy to want more out of 1st overall pick, but on a team with Cp3 and Devin Booker, Ayton is doing what the team needs him to do. Set screens, be a rim protector, and be forced on rebounds.

You would like to see Ayton be a little more involved offensively just for the fact to keep him engaged. They're going to need him because there isn't anyone that can really stop Anthony Davis or Nikola Jokic, but you at least feel better about having the athletic Ayton against them. Ayton is still only 22 in his 3rd season. He's always been someone that improves incrementally the more he plays as the season goes on. It's easy to look at his numbers and say he's been disappointing as a 1st overall pick, but I think behind Booker and Paul, Ayton is doing the right thing and being a star in his role.

The Suns are still a work in progress but have shown significant improvement through the season. They play unselfishly on offense and play together on defense. Those two things can take team places, especially if everyone has bought into the same goal.

The Phoenix Suns will make the Western Conference Finals in the 2020-2021 season.